The Art Of Ulele

The Art Of Ulele

While our restaurant’s prime focus is on the native-inspired foods and spirits we serve, we also believe that our patrons should enjoy the experience of dining. The former 1903 Tampa Water Works pumping station has been filled with art specially bought or commissioned for Ulele, as well as other works from Richard and Melanie Gonzmart’s private collection. In addition, the restaurant’s table tops, bases, front door and other aspects of the restaurant were designed by local artists and craftsmen. 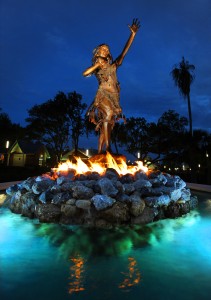 Sitting between the restaurant and the Ulele Spring, the nearly seven-feet tall, 500-pound bronze by Cave Creek, AZ artist Vala Ola celebrates the independent spirit of Ulele, the young daughter of local Tocobaga chief Hirrihigua. Fourth generation co-owner and President of the Columbia Restaurant Group Richard Gonzmart said he chose Ola for the commission because she was the only artist to focus on Ulele’s strength and determination. The statue is surrounded by water and a “ring of fire.” Special lighting accents the statue at night. Ulele’s costume is made of Spanish moss and her jewelry is shell beads and pearls.

“Bringing life to the human figure in art is my passion.” 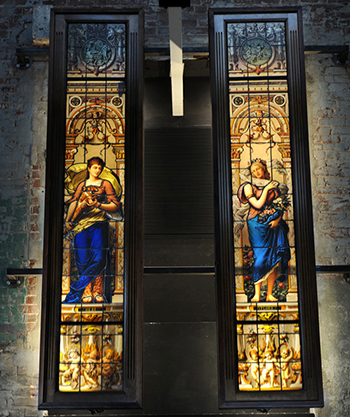 The 1789 signed French stain glass panels over the kitchen doors were purchased by Cesar and Adela Gonzmart at a 1972 auction in Atlanta for a house they hoped to build. They eventually designed and built their Davis Islands home around their prized panels. When the house was sold in 2003 after their deaths, the panels were moved to the Columbia Restaurant’s Centennial Museum in Ybor City before their new home at Ulele over the doors to the kitchen. “In The Garden”
Erik Renssen
Amsterdam, The Netherlands

Richard and Melanie met Erik Renssen and his wife Suzka in their Amsterdam gallery nearly three years ago after spotting the 8' x 4' mural (on our orange wall at Ulele) called “In the Garden,” or as we prefer to call it, “In the Park.” It’s based on what Richard considers Picasso’s greatest painting, the controversial “Guernica.” He thought it was perfect for Ulele and also became an ardent collector. There are numerous pieces in the Ulele collection. Five commissioned oil-on-canvas pieces, celebrating Ulele’s five signature cocktails, hang by the bar. A collection of note cards featuring those pieces along with the drink recipes sells at the restaurant for $12 plus tax. 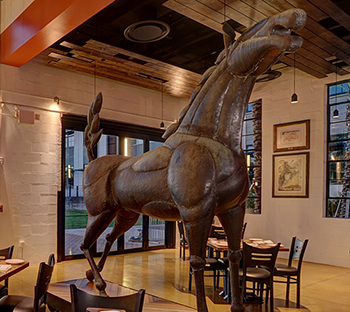 Born in 1927, Victor Delfin is one of the leading sculptors and painters in Peru. Richard and Melanie Gonzmart visited his home and ultimately bought the 1962 “Laughing Horse” sculpture at an online auction. It reminded Richard of La Queue de Cheval restaurant in Montreal that helped spark his interest in starting a new restaurant concept. Delfin’s paintings of birds, some on display at Ulele, honor the pre-Hispanic Paracan culture of Peru. Delfin is best known for his monumental El Beso, a large sculpture unveiled in 1993 in the "Love Park" by the Pacific Ocean in the Miraflores district of Lima. Wrapped for protection, the fish and a companion piece sat for a while in the Gonzmarts’ garage. Richard told curious grandchildren they had captured zombies on their trip. The instantly iconic “gear” Ulele front doors were created by noted metal worker Dominique Martinez and his team at Rustic Steel Creations. Martinez said he wanted to evoke the industrial past of the building, as well set the tone for the Ulele experience. Rustic Steel also created the restaurant table bases, the customized bike rack, the cradles for the bottles in the wine room and the hood for our barbacoa grill. The table tops at Ulele were hand-crafted by Andrew Watson and his team at Built Furniture and Fixtures in Seminole Heights. Except for the two largest tables, the wood is from a 100-year-old barn in north Florida.  “Working on this project was something I knew I had to do,” said Built’s owner and lead designer Andrew Watson.